Lycopodium--attack of the club moss 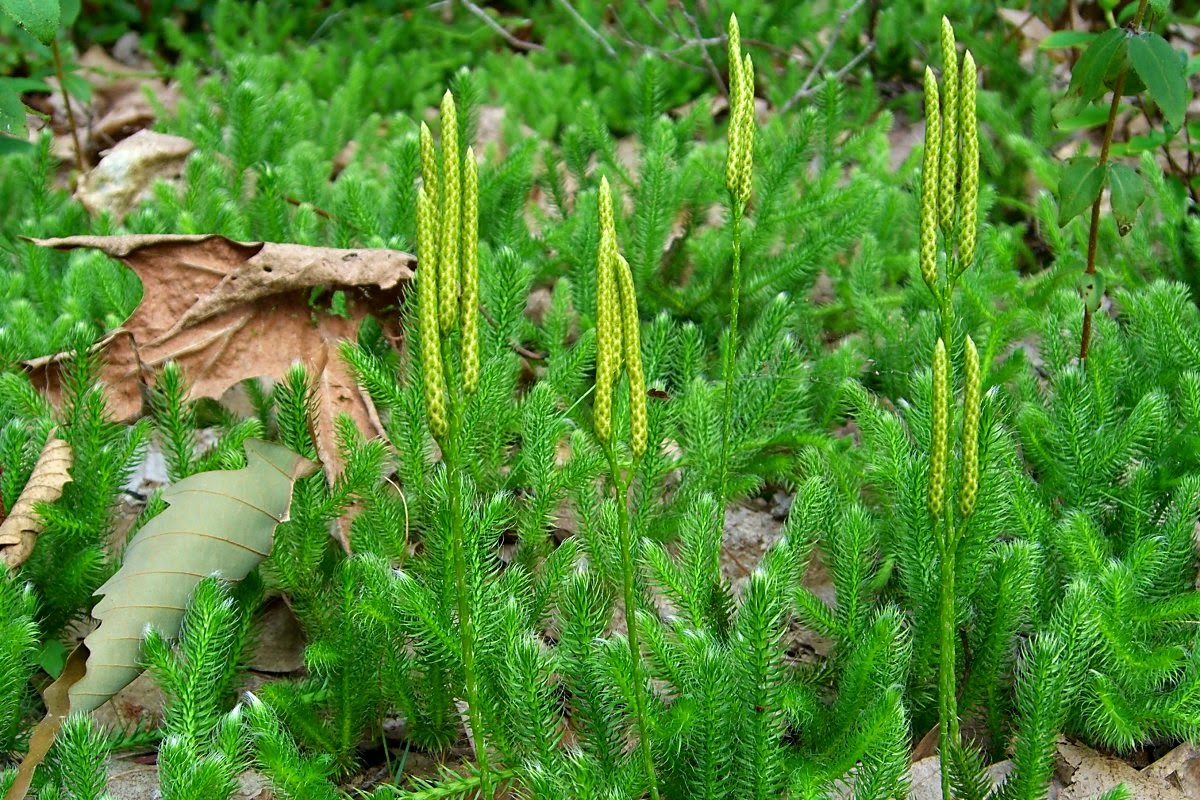 Lycopodium. Club moss.  Technically it's a moss, but it doesn't lay low or horizontal like some other common mosses.  Although it propogates by travelling along the ground, it sends up shoots which stand straight up, resembling a pine seedling.  This gives  it one of it's names: 'ground pine'. Lycopodium clavatum is the species found in Europe, so is the species used to make the homeopathic medicine.

When most homeopaths think of Lycopodium, they think things like abdominal bloating, gas, and feelings of inferiority.  The classic phrase "if you don't like a podium, you might need Lycopodium" helps us remember how the Lycopodium individual is not keen on public speaking and so the remedy can be used for these occasions.

However, a well known homeopath recently identified Lycopodium as the genus epidemicus (flu remedy) for the flu this winter.  Indeed, many of the symptoms of this year's flu are symptoms that match the potential Lycopodium picture:

FEVER-Remittent (the illness waxes and wanes, coming back just when you think it's over)
MIND-Dullness-headache, with
HEAD-Pain-light; from -agg.  (light in the eyes causes headache)
NOSE sinuses, complaints of -frontal sinuses
NOSE-congestion
EXPECTORATION-rusty (this was towards the end of the cold)
CHEST-inflammation-Bronchiol tubes-bronchopneumonia (seen in a couple of patients)
VERTIGO-lying-amel.
update 3/3/15: got the cold again, here are some more symptoms I forgot about:
THROAT-DRYNESS-lying agg.
THROAT-MUCUS-greenish (by the way, it is all coming from the adenoids but Lycopodium is not listed in the very few adenoid rubrics available).
HEAD-PAIN-Forehead-Middle of (one is tempted to use sinus rubrics here but more simple head pain rubrics seem to have been used)

I first got this flu in September. Usually I am happy to get the flu early in the season because then I can figure out the homeopathic remedy and use it on other people.  With this flu, you go down. Fast and hard.  Your head feels like lead, at least mine did.  I could not think. The sinuses were completely congested and heavy. Sinus headache.  Light shining in my eyes while driving made the headache worse. I felt vertigo when watching moving objects (although Lycopodium did not show up in the computer repertory for that symptom).

I had tried several flu remedies and nothing worked. I finally used an herbal bronchitis formula which worked for the cough with which this flu ended. (update 3/3/15: herbs seem to work well for this flu. When i got it last weekend, I was up at a hike-in cabin in the mountains and did not have any homeopathics with me (doh!).  Luckily I had thyme and oregano which I had just picked from my yard before heading out for the trip.  I chewed on the thyme and oregano buds and the sore throat went away and I felt much better in the morning).

Then Paul Herscu, homeopath, naturopathic physician and teacher, suggested lycopodium as the flu remedy this winter. I was over the flu so I couldn't try it (see update below). I asked other people to tell me their symptoms but it wasn't until late January when my family came down with the flu.  Lycopodium seemed to work. I had a few symptoms again, took lycopodium right away and was fine. I also took other remedies though (I can never keep myself to one remedy). Then a friend of mine took Lycopodium when she and her family were sick. She got better within hours but her husband who didn't think Lycopodium fit his picture refused to take it and his flu carried on for days.

After reviewing Lycopodium again, I can see how it can be a cold/flu remedy. Although it's classically used for gastrointestinal distress (which also is apparent in this flu in the form of loose stool and gas), like any remedy it can treat a multitude of other symptoms. It's interesting that Lycopodium, the plant, contains triterpinoids with acetylcholinesterase inhibitor activity.  Use of acetylcholine esterase inhibitors can carry an increased risk of bronchitis, pneumonia, and chronic cough.  Acetylcholine increases mucous secretion and congestion in the sinuses. So if Lycopodium as a plant can cause the symptoms associated with increased acetylcholine (via acetylcholinesterase inhibition), then using Lycopodium in a diluted and potentized homeopathic dose should treat the same symptoms.  This would prove Hahnemann's theory of 'like cures like'.

I will definitely be keeping this remedy in mind for future flus which have the sinus and bronchial symptoms listed above as hallmarks.

UPDATE 3/3/15: did take Lycopodium this morning again as the cold is still lingering after getting back from my mountain excursion over the weekend.  The sinus pain is definitely right in the middle of the forehead, is sinus in nature, and worse with inspiration although it is not listed in this rubric in RADAR.  This shows the difficulties of using an incomplete repertory to find a remedy. Also my throat was very dry (THROAT-DRYNESS: 379 remedies) but only bothered me at night when I lay down (THROAT-DRYNESS-lying-agg.: 2 remedies). Although using large rubrics and tiny rubrics are both ill advised, using the smaller rubric brings us to the remedy in this case.  After a 200c dose, then a cup of coffee (I know, I know) then another 200c dose, the sinus pain is still there but congestion is improved.  Hopefully the dullness of mind caused by the headache will subside as I need to contemplate the periodic table in relation to disease for an upcoming discussion next week.

Cholinesterase inhibitors and the risk of pulmonary disorders in hospitalized dementia patients.