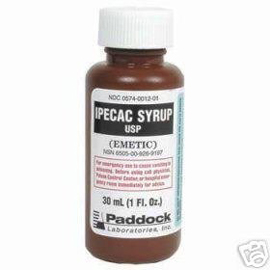 Most of us grew up in a house with a bottle of Ipecac syrup in the medicine cabinet.  It was there for accidental poisonings--like when the baby gets into the cleaning solutions or an open medicine bottle. It's actually rarely recommended these days, but the use of homeopathic Ipecac has many uses and in fact we just used it yesterday. 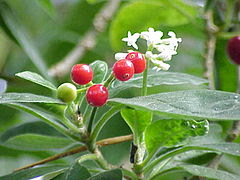 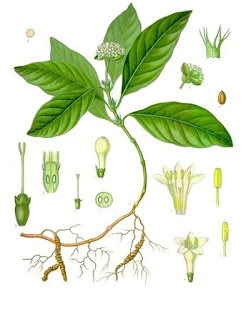 Carapichea ipecacuanha grows in South America and has long been known for it's emetic properties. Emetic means "induces vomiting" but it also can cause coughing to the point of expelling mucous, such as in the case of bronchitis. Basically it has an upward force, whether stomach contents or stuff in the airways it causes it to move up and out.

Homeopathic dilutions of Ipecac have the opposing effect.  As we know with homeopathy that like cures like, homeopathic Ipecac relieves vomiting and coughing.

When is it best to relieve vomiting and coughing? When the vomiting or coughing is not producing a good effect. Certainly if someone did ingest something not good for them, vomiting is the body's way of getting rid of it.  But in the case of a stomach flu, the virus will not be gone from the body after vomiting, it is only creating unpleasant symptoms. Similarly, if someone has motion sickness, vomiting will not alleviate vertigo.

In the case of bronchitis, if a person does have a wet cough, certainly we want to expel the mucous. But in a dry viral cough or even asthmatic cough, the coughing is not producing any good effect. Pertussis (whooping cough) is a dry persistent cough where the child will cough and cough until they vomit.  This is the perfect time for using homeopathic Ipecac.

In Vancouver, WA there are two types of illnesses beginning to go around the schools. One is a 24 hour stomach flu and the other is a cough.  Both can be perfectly treated with Ipecac.  Two nights ago my daughter woke with a stomach ache and nausea in the middle of the night. She spent the next morning vomiting, not even able to keep down water. Her fever was 100.9.  I gave her a dose of Ipecac 30c homeopathic pellets (put under the tongue or in the mouth and let dissolve).

She did not vomit again after that. She was able to eat a little food that afternoon and able to drink two glasses of water.  Her fever stayed at 101 until the late evening.  That is Ok. Fevers are there to fight off viruses.  For the fever we only gave more water. This morning she woke fever free and feeling fine.

Did the Ipecac change the length of the illness? Probably not. But it did help the symptoms while she was ill, ensuring that she did not get dehydrated and she could feel better on her day off from school. In the same way, Ipecac will likely help a case of pertussis or dry cough (though there are a couple of other remedies also great for this), but the person taking it may still be contagious even as their cough quiets down.  A person with an asthmatic cough can be helped with homeopathic Ipecac, but they should probably also get their allergies eliminated (through NAET) to take care of the problem permanently.

Ipecac is not recommended much anymore. But homeopathic Ipecac definitely is! If this is not in your medicine cabinet at home, go out and get some. It may save you when vomiting hits in the middle of the night.