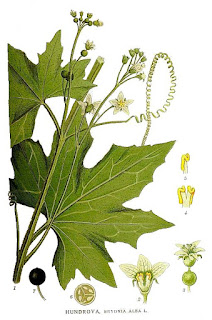 I think I've finally figured it out! The homeopathic remedy for this years flu.

It has been tough. People have had sinus inflammation, severe headache, cough, even pneumonia. Pretty much every symptom in the respiratory tract. Antibiotic herbs or even antibiotics have not helped the sinuses or cough. It's definitely been viral. Even the pneumonia has been viral only. I have resorted to using lomatium--the most potent anti-viral herbal tincture we have--for treating this flu (and it has worked). But the homeopathic for this flu eluded me.

We tried Belladonna because of the intense headache and quick sinus inflammation. I tried Gelsemium because although some of the symptoms (especially in the nose) come on suddenly, most of the other symptoms develop over a series of days, starting with having a chill. We have been using Droseraplex (a combination of homeopathics including Drosera, Belladonna and others) for the cough and headache together, but it has only helped reduce symptoms during the virus (especially the cough) rather than stimulate a very speedy recovery. Speedy recovery is what we want when using homeopathics.

I had this flu and it was bad. Then I felt like I was getting it again. Took lomatium.  Then a few weeks later felt like I was getting it again. It started with feeling chilled--like not being able to let any cold air touch my body. I don't like having to have a space heater next to me all the time. It makes me feel like a wimp. I especially felt cold after getting hot and sweaty, such as when I left the gym the previous 2 mornings after a workout.  Then I got pain in the sinus which leads to a frontal headache. I did NOT want to get this flu again.

I also realized that my nose had been VERY dry and I had woken up in the night with a dry throat. Heating houses in winter dries the air. Dry mucous membranes do not defend the body against invaders as they should. I got out the humidifier. Then I realised the remedy: BRYONIA.

Bryonia-dryonia. That is what Dr. Will Taylor, M.D. and homeopathic doctor and professor, used to say so that we remembered the state of the mucous membranes when Bryonia is indicated: dry.  My nose was so dry even a saline rinse with a neti pot did not help. I considered putting vaseline or some herbal salve in there. But luckily I remembered about Bryonia.  Here are the list of symptoms that seems to match this particular flu:

Nose: dry, painful. Cold air moving into the nose and sinuses hurts. Nose and sinus can also feel burning and inflamed.
Head: severe headache. This seems to be the hallmark of this flu. The headache, which at first is in the frontal sinus and then extends to the rest of the head, brings you to tears.
Ears: shooting pain in the ears
Eyes: eyes are sore, moving them hurts
Body: chilled. Worse with cold drafts, person wants to be wrapped up and laying in bed. Chill can be felt as achy pains or sharp pains and most of the pain is in the muscles. The chill and ache was so bad at first that I considered Eupatorium. It had even pushed me into buying a hot tub last month (which I had been looking at doing for awhile) and spending more than twice as much as I thought I would to do it! Bryonia can also treat swollen inflammations with sharp pains, such as those that come from gout, but I haven't seen this during this flu.
Respiratory: cough. Dry cough which is painful, breathing deep produces cough so the patient tries to only breath lightly. Holding the chest may diminish the pain. Pleurisy, pneumonia, bronchitis.
Gastrointestinal: constipation from dryness in the intestines. Stools can be hard, dark or black tinged, and there can be rumbling and abdominal pain. There has not been much vomiting with this one. 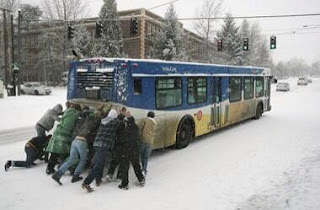 Here's a pic from Portland to help you remember a little about Bryonia and see how well we fare in snow. The below freezing temps dries out the air. Then imagine pushing a bus, getting hot and sweaty, then standing out in the cold and getting a chill. Perfect environment for a Bryonia flu!

I just ordered this supplement to better treat this flu. 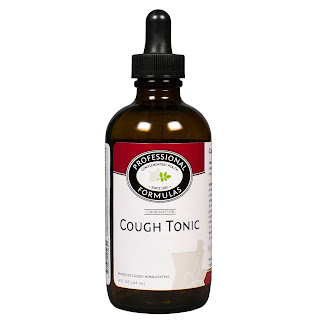 It has the typical cough homeopathics: Drosera, Spongia, and the flu inflammation/pain remedy Belladonna, but also has Bryonia, which the Droseraplex did not have. It will be in tomorrow and we will start using it. Then I'll post and update. For now, I am taking Bryonia 30x and immediately after the first dose, my nose was became more moist and the sinus pain diminished greatly. You can usually find Bryonia at your local health food shop but this combination remedy pictured here is only available at doctor's offices.