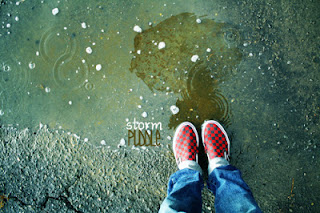 We had some unusually nice weather up here in the northwest, so it was disheartening when the kids came down with a horrible flu.  The vomiting-and-diarrhea-at-the-same-time kind of flu.  A flu that lasts for two days.

It is not the kind of flu that comes on quick or with a high fever.  For our daughter the vomiting came on first, with a bout of vomiting, then feeling otherwise thirsty and tired but OK.  Then a day later, not feeling so great, then the intensity increased with vomiting and diarrhea at the same time and alternating for the next 2 days.  The fever was never over 100.4 and the forehead did not feel as warm as more distal parts.

Whenever vomiting and diarrhea happen at the same time, we think of Veratrum album. 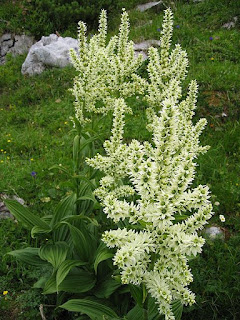 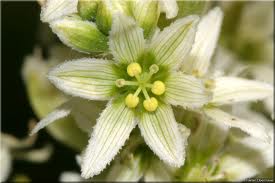 A pretty, wild growing plant, the veratrum bulb can sometimes be mistaken for wild garlic.  When this happens, people get seriouly ill by ingesting the bulb.  Like many substrates of homeopathic medicines, Veratrum is poisonous, but can be used as a medicine when diluted in the homeopathic way.  Remember, the dose makes the poison.  Our everyday medicines--Tylenol, aspirin--are poisonous when too much is taken.  Even water, when a person drinks 2-3 gallons very fast, can kill.  But used in the correct dose, all these things can be beneficial.  Veratrum is said to have been used as an emetic by physicians in ancient Greece.

Veratrum album homeopathic was used widely in the last 2 centuries for cholera.  It corresponds with watery stools, projectile vomiting, and especially vomiting and diarrhea happening at the same time.  Although cholera is caused by a bacteria, if the symptoms are similar, the homeopathic Veratrum can be used for illness caused by bacteria or viruses.

Unlike the Aconite flu we saw in February, the Veratrum flu carries with it only a low grade temperature.  A person's forehead and skin can even feel clammy, like a cold sweat.  Our daughter's temperature never got to be more than 100.4. The patient may also feel vertigo with the nausea. The diarrhea and vomiting of the Veratrum flu leaves the person feeling debilitated and shaky.  The flu that was going around here seemed to last 2 days for the diarrhea and vomiting with an initial prodrome of occasional vomiting or diarrhea a couple of days before the intense symptoms arrived.  The diarrhea and vomiting can be sudden and in the middle of the night, typically for Vertrum, around 4a.m. If you have any diarrhea or nausea this week, I would go ahead and take some Vertatrum album in a low dose (30x, 12c, 30c).

I am still deciding is Veratrum is the best remedy for this flu as it's cousin, Iris versicolor, is used for very similar symptoms. 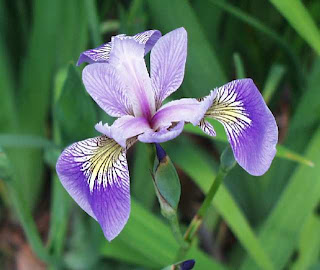 Vithoulkas says that Iris versicolor is indicated for children's flu more often than Veratrum album, especially if the diarrhea and vomiting get worse at 2-3a.m.  In fact, that is when our younger daughter's symptoms awakened her.  Iris was also used as an emetic in the past, this one by native Americans.  Iris causes vomiting and diarrhea and is especially indicated when the vomitus and diarrhea feels burning or acrid. The whole digestive tract may feel like it's burning.

It's interesting to note that both Veratrum album and Iris versicolor are in bloom right now. When we experienced the Aconite flu in February, that was the time the aconites were pushing up through the snow. Normally, Veratrum is the earlier bloomer, coming out in May or June whereas Iris can be May, June, July or August depending on the climate.  It has been unseasonably warm here in Vancouver so I called my friend who has many blue irises in his yard to ask if they had bloomed yet.  Sure enough, he said there was one iris flower already up and blooming.

My older daughter felt nauseous this morning and I gave her a dose of Veratrum, which relieved the nausea.  So I think that if Veratrum is not "the" remedy, at least it's close enough to help.  If you get nausea, vomiting, and diarrhea this month, use either of these homeopathics and let me know which helps the most.  I would love to hear about your experience!