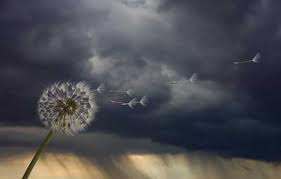 Is it allergies or is it the flu? It's obvious when a child suddenly gets a fever that spikes at night after being out in a cold wind that he or she has a flu. However, when these spring flus come up, so do allergies. Many people don't get the flu per se, but they get what they think is allergies due to all the sneezing and itchy eyes.

We've seen both of these situations this week in Vancouver, Washington. Last week there were a couple of sunny windy days which were followed by rain. As soon as the sunny days came, people went outside for recreation thinking it was spring. However, they most likely did not bundle up enough against the cold--it didn't get higher than 60 degrees and a couple of the days were in the 40s.

So what happened? Some people got sore throats with pain and/or itching that extended to the ears. Sneezing and itchy eyes often accompanied this. Were there tree pollens or mold spores released on those days that caused those symptoms?

Other people (mostly the small kids) got fevers of up to 103 that were higher at night. The children complained of a mild sore throat and ear pain, and they had a viral look to their face--a bit flushed and obtunded. If in fact this was an Aconite flu, you might also have seen the pupils being small (unlike Belladonna which shows up with dilated pupils) and one cheek being red while the other is not (Belladonna shows up with both cheeks red or red face entirely while the hands are cold).  Also the hands and feet can be hot during an Aconite flu.

This is what we have seen and Aconite has helped both the flu and allergy-like symptoms. Interesting as well, there have been cases of Pertussis in the schools recently and Aconite is a remedy for the early stages of croup.

Aconite should be used in the early stages of illness or during sudden spikes in fever, especially after the person has been exposed to a cold dry wind.
Posted by Dr. Sheryl Wagner at 1:13 PM